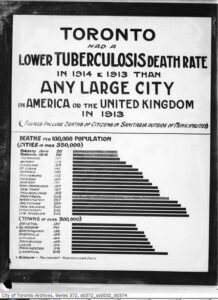 When the Toronto Free Hospital for the Consumptive Poor opened in 1904, it alarmed local residents.  Indeed, it was  located here because of opposition in Wychwood!  Local merchants and farmers were reluctant to deliver food.  Given treatment for TB included what is today called occupational therapy, the hospital (built on Buttonwood Farm) decided to continue as a productive farm into the 1950’s.  Chickens and pigs were raised in the valley, there was an orchard, and a 12 acre vegetable garden.  A children’s play area existed in the valley too. Antibiotics became available in the 1940’s, and by 1953, there were very few patients.  The farm was no longer needed, and what remained was washed away in 1954 by Hurricane Hazel. Toronto boasted in 1914 that it was the safest large city in North America.  Only 95 deaths per year per 100,000.  In 2021 terms that would be 8 Torontonians dying every day with no cure.  Compare that to Covid-19, with about 32 deaths annually per 100,000 in Ontario.  TB was three times as deadly, killed a lot of children, and had about a 50% survival rate. Tens of thousands of Torontonians died, and a large number died here. Local historian John Maniezzo visited the ‘Lost Piggery’ recently as reported in BlogTO https://www.blogto.com/city/2021/04/toronto-hospital-farm-tuberculosis-patients/