The Mount Dennis Community Association has been working to strengthen Toronto’s greenest neighbourhood since 1975. The MDCA works with politicians, businesses, and agencies at all levels to advocate on behalf of the community, monitoring developments, trends and proposals. The work of the MDCA has been instrumental in reshaping government policy decisions in the best interest of Mount Dennis residents on a number of occasions in the past, and we continue to advocate for the neighbourhood under the motto ”Working together to strengthen Mount Dennis”. In this context the MDCA engages in community-building activities such as litter clean-ups, safety audits, celebratory events and operating a natural ice rink. 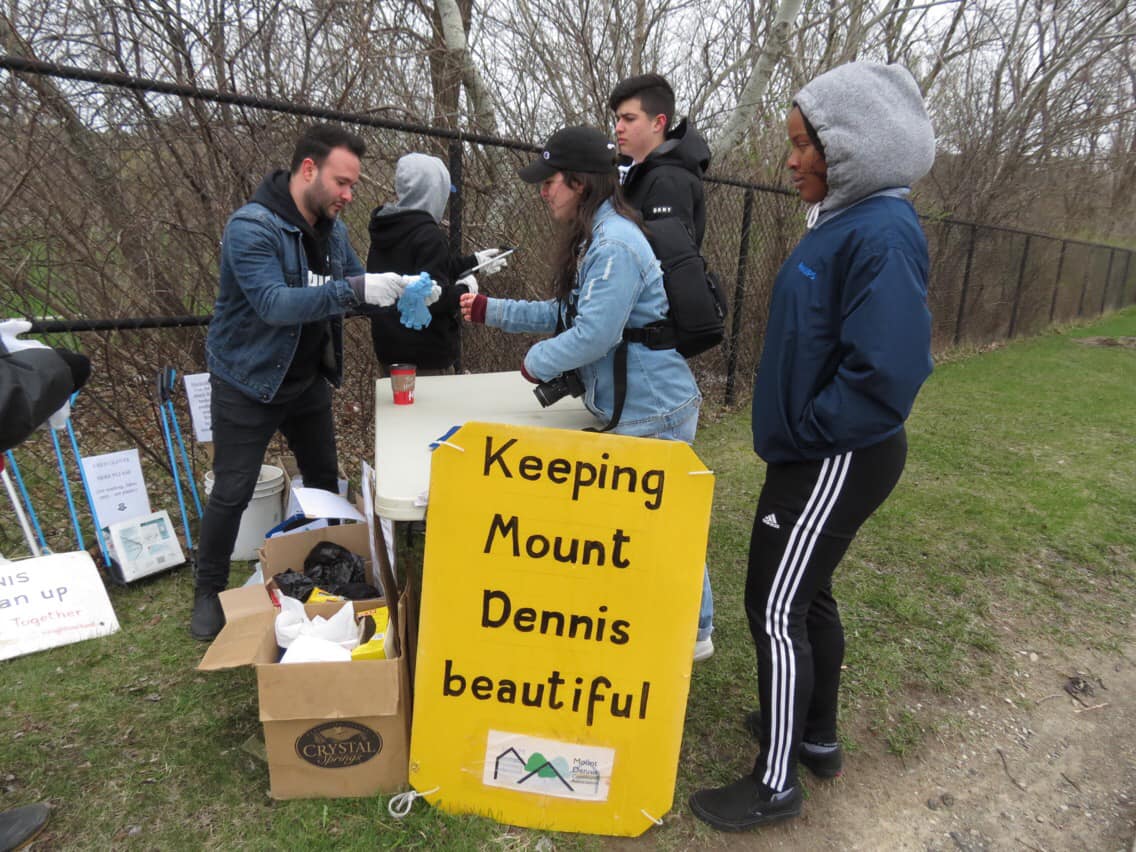 The Mount Dennis Community Association was formed about 1970 (we have no exact date). It was incorporated (under the Corporations Act of Ontario) on Jaunuary 3, 1975.  At that time there were other active community associations in the general area, including the Roselands Community Association, which included the area south of Eglinton and west of Greendale.

2004
Transition Process
Beginning of MDCA's transition
By the early 2000s the MDCA was very small; most Board members were in their seventies or eighties, and the group had a very low profile in the community.
In early 2004 our area's Councillor, Frances Nunziata, became aware of a small group of residents south of Eglinton and another small group north of Eglinton, both of which were concerned about improving the Mount Dennis community. She encouraged the groups to get together. About twenty people met over a period of nearly six months, pulling together a constitution and By-laws, and drumming up community interest in forming a Mount Dennis Residents Association (MDRA).
2004
Transition Process
MDRA vs MDCA
In late summer of 2004 the MDCA's President Marjorie Sutton and its Secretary Charlcie Stickley, both in their eighties, met with the MDRA's Board members and tried to persuade them to become part of MDCA. The MDRA members were surprised to learn that the MDCA still existed, and refused this offer. They had spent many months creating their organization and shaping its values and goals, and were not about to be subsumed into the MDCA.
At a public meeting on October 4th, 2004, the MDRA held its first public meeting, with fifty people in attendance, and was officially voted into existence. Those present adopted the MDRA's Statement of Purpose, adopted a logo, agreed that the group's activities would be organized by a Steering Committee of volunteer members, and agreed to an initial set of priorities..
Over the next year the MDRA held monthly public meetings in the Mount Dennis Legion Hall, with an average attendance of more than thirty people. Despite Councillor Nunziata's role in bringing the group together, the MDRA stated clearly from the outset that it was and would remain politically neutral. But they were happy to provide Counciilor Nunziata with a small time-slot on each meeting's agenda, where she would provide updates from City Hall, answer questions, and hear comments and concerns. This arrangement worked well.
2005
A new chapter for the MDCA
MDRA -> MDCA
By the early fall of 2005 it was clear to everyone that the MDRA was a success. Attendance at monthly meetings remained high, and there had been an impressive list of achievements during the year. Marjorie and Charlcie came back to the MDRA's Board members with a new proposal. They (and the MDCA's other Board members) were ready to retire from MDCA, and comfortable in "handing over the reins" to the MDRA's officers, provided the organization would maintain the MDCA's "Objects" and Constitution, and would represent the whole of the Mount Dennis Community - businesses as well as residents. They also pointed out that the MDCA had the advantage of being incorporated, and had a bank balance of several thousand dollars.
At a public meeting on October 4, 2005, the Mount Dennis Residents Association agreed to change its name to the Mount Dennis Community Association, made amendments to its Statement of Purpose, and adopted the Objects and Constitution of the MDCA. An election was held, and former officers and board members of the MDRA were elected to the officer positions and to the board of the Mount Dennis Community Association.

The Mount Dennis Community Association is non-partisan and will:

Our board members are made up of residents – homeowners and renters – and agency representatives. If you would like to learn more about how to join, please contact: info@mountdennis.ca