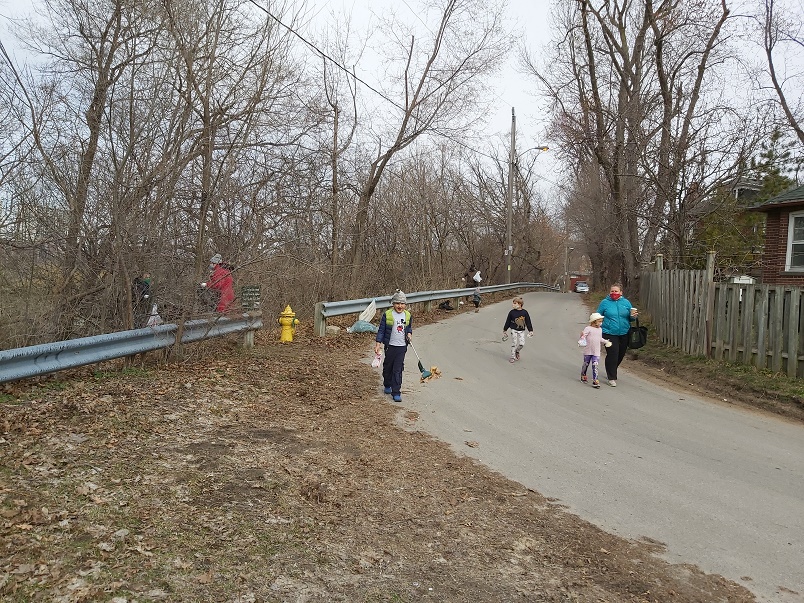 MDCA’s Secretary, Simon Chamberlain,  has been organizing annual Mount Dennis Community Clean-Ups (on behalf of the MDCA) since 2004!  Typically we hold between 5 and 7 of these during the month of April. Most happen on Saturdays, but we often do some on Sundays as well.

Our MDCA clean-ups are mostly focused around the perimeter areas of the Eglinton Flats parks.  Parks staff take care of cleaning up the areas within each of the parks, but we look after the outer areas where the slopes are steep and there is usually lots of litter from the adjacent roads. City staff are forbidden to work on steep slopes, but that is where a lot of the litter ends up!  So we provide ropes and willing volunteers (all of whom have to sign a form stating that they are doing this at their own risk and acknowledging that the MDCA accepts no liability and carries no insurance) … this happens at the sign-in table, where Judith is queen and makes sure everyone does just that!.

We collaborate with City staff, who arrange for special garbage pick-ups of what we have collected. They also provide us with bags and gloves, which makes everything easier! We loan “grabber” tools for those who find this easier than using their hands. We separate out hazardous waste, which I take myself to the nearest City depot.

This year I plan for us to follow our regular plan of doing these Saturday clean ups, which run from 10 a.m. to 12 noon (or 1 p.m. plus for the real keeners!).

–  April 2:: along Jane Street (Eglinton to Pinehill Crescent, both sides), and along the south side of Pinehill.

–  April 9: along the ravine edges of Pearen Park (west side slopes), starting at Eglinton and going north along the laneway until we reach Somerville, then walking over to Sunnybrae Crescent and doing its ravine edge areas too. (Our house is the last one on Sunnybrae, and for this clean-up Judith typically provides tea and goodies for anyone who wants them).

– April 16: Dora Spencer Road (across from Irving Tissue) has a fairly steep bank on one side and an open grassy area on the other, both of which collect litter and need to be cleared. We work down from the Weston Road end, then walk along Charlton Settlement Ave. towards Emmett (picking up as we go), ending up at the area across from the first two apartment buildings on Emmett, where the hillside always collects LOTS of litter!

– April 23: (Earth Day) we start at Astoria and Lambton. Some people go east and work along the entire Astoria park edges; others go west to Jane Street, and clean up along the edges of Jane down to where the chain-link fence begins.

– April 30: Our final clean-up is usually close to the main entrance of the south-east Flats park. The steep little hillside beside the main entrance collects LOTS of litter, and we will also clean along the Eglinton edge all the way to the top of the hill.

Sometimes we do extra clean-ups, usually on Sundays. We have often cleaned the informal park area where Railway Lane meets Ray Ave. Last year a couple of families decided they wanted to clean up along the pathway that leads from the park on Sidney Belsey towards the Humber River, and I joined them on the Sunday they were doing it, cleaning up myself and helping out with logistics and tools (although I didn’t have extra volunteers to bring).

In a “normal” year all these clean-ups would be advertised in MDCA’s spring newsletters (which are delivered to every mailbox in Mount Dennis), but in 2022 that will not be happening.  As usual, we will will be putting up one or two big posters one week ahead of time, near where the clean-up will happen. And Simon  typically prints up little invitations on coloured paper and hand-deliver them (about a week or ten days in advance) to every mailbox on the streets closest to where we will be working. (So, for example, for the April 9 clean-up they will go to every home on Pearen, Glenvalley, Somerville and Sunnybrae). The extra clean-ups don’t usually get advertised in the same way.

This year we  are relying on Mike to advertise these events on the MDCA web-site, and I will be encouraging all MDCA board members to spread the word on social media etc. We also always have flyers about the clean-ups at Supercoffee, which always carries posters and flyers, and supports us every year by letting us hand out “half price coffee” coupons to each of our volunteers at the end of their clean-up shift

With regard to TTC volunteers and others joining us for the Earth Day clean-up, we would be quite happy if that brought in 8 or 10 extra volunteers … But NOT if it was 30 or 40! (that would overwhelm us!).  There are ALL SORTS of other areas in Mount Dennis that we never get to, and we would LOVE to have them work in those areas. Examples might include Industry Street, Ray Ave. (east of the bridge), Todd Bayliss Blvd. … and the entire No Frills triangle! 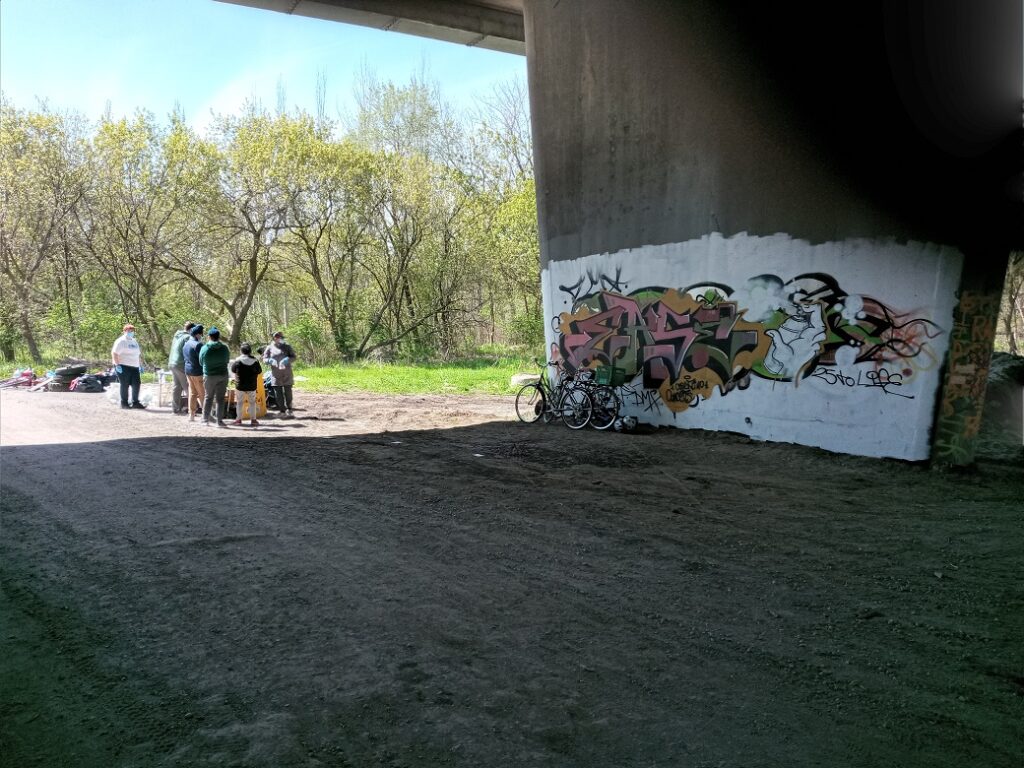