The Mount Dennis Community Association is the lead organizer for several events each year, but we also participate as partners or attendees with other groups. The best way to stay updated on our events and attend is by joining our email list.

If there are any local community events you would like to let us know about, please email us at info@mountdennis.ca!

The yearly MDCA spring clean-up is a series of community volunteer events that takes place throughout April/May. We invite members of the community to join us on walks and pick up as much garbage as we can to help keep Mount Dennis beautiful.  Some events are held in conjunction with community partners, so if your group wants to get involved, email us at cleanups@mountdennis.ca

party by the pond

Since 2012, the MDCA has hosted a Family Fishing Week event called “Party by the Pond”.  We invite the community to enjoy the beautiful green space and nature within Eglinton Flats, participate in activities such as fishing, and enjoy food and entertainment provided by local food businesses and artists.  We hope to resume in 2022.

See what Nature Valley had to say about our event’s impact on the community!

Cobechenonk, Anishnaabe for “leave the canoes and go back” is perhaps a better name for the Humber valley, given that the Carrying Place Trail, (from Lake Ontario to the upper Great Lakes), runs up the valley.  The trail was used by First Nations since the glaciers retreated.  The trail was then used by fur trade travelers, later considered as the site of a canal to Georgian Bay, and evolved into Weston Road.  We have been told that summer villages existed on the flood plain, with weirs built across the river to trap salmon, and garden plots in the fertile soil.  MDCA supports efforts to recognize the long history and continued participation of First Nations people in our community, especially in the valley lands.

Party by the Pond 2022 will again be our chance to meet with the community at an event involving literally everyone, from long time residents to young soccer players, avid fishers to people walking their dog.  It brings us all together outdoors, to share our natural environment.  So we present a few words and images on the  back story of Party by the Pond. 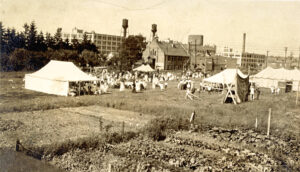 History 100 years ago, the Church of the Good  Shepherd ( now known as St Mary and St Martha’s) organized annual Country Fairs, as shown in the picture, circa 1920.  More can be learned at https://www.stmaryandstmartha.org/history/#goodshepard

Topham Pond: Fred Topham was brought up on Beresford Avenue and attended King George School and Runnymede Collegiate  He was a medic in WWII and received the VC for his action under fire and while wounded himself. He was quiet and immensely kind; a natural leader. After the war Toronto Police wanted him to join the force. He discovered that they really wanted him for show and to promote their image, so he quit and joined York Township Hydro. While working for Hydro there was a person trapped under a car. He told his colleagues to drag the person out when he shouted, he lifted the car and they did. This was typical Fred Topham. He was a quiet hero and highly respected.  Legion Branch #35 and Charlcie Stickly were largely responsible for the naming of the Pond, which was a TRCA project in the flats, when the houses were removed and the wetland restructured along with the stream that flows through the golf course. Topham laid the corner stone for Maple Leaf Branch 266 on Dundas St.as well. ( Credit: Madeleine McDowell)

A video on life in 1960’s Eglinton Flats can be viewed at https://www.mountdennis.ca/eglinton-flats/1963/

TRCA and MNR Restoration: Toronto and Region Conservation,(TRCA) and the Ministry of Natural Resources (MNR) took control of the flats after the flooding caused by Hurricane Hazel in 1954.  Eglinton Avenue was extended west from Weston Road, and the parks created.  The pond was designed to fill with filtered rainwater, not storm water runoff.  The water level is controlled by an outlet at the north west corner.  A variety of fish are now caught, including sunfish, catfish, bass, and reportedly, pike.  Some of these species were stocked by MNR, others seem to be undocumented settlers.  Toronto Forestry has been increasing the tree cover around the pond, and volunteer group have assisted in many ways including cleanups, tree planting, a marten house, and more.

MDCA Summer BBQ’s:  Prior to Party by the Pond, MDCA organized much smaller BBQ events at the pond for several years, but noise restrictions limited the scope of these events as group permits are only issued for sporting events.

Family Fishing Week: Adults fishing in Ontario are required to register for an Outdoors card, (http://www.ontariofamilyfishing.com/fishing-information/ontario-fishing-license/) , but on selected dates this regulation is waived. Party by the Pond is a sanctioned family fishing event, part of Family Fishing Week.

Party by the Pond Begins: Toronto and Region Conservation Authority hosted a fishing conference in early 2012, and MDCA was asked to support an event at Topham Pond organized by Allan Crawford of Toronto Parks and Recreation, and TRCA.  So MDCA volunteers located some BBQ equipment and c0-hosted a family fishing event in July 2012. Subsequent years were organized by MDCA, assisted by Toronto Urban Fishing Ambassadors.

Partners over the years have really made it a community event.  We have uniformed officers from MNR and TRCA, from Toronto Police Services, who always enjoy meeting the community and especially the children, at a fun event where it is educational rather than enforcement.  The Urban Fishing Ambassadors literally bring a truckload of fishing gear and dozens of volunteers to teach the children the realities of fishing. Our Mount Dennis Business Improvement Area (the BIA) would love to host a street festival, but can’t shut down Weston Road for safety and transportation reasons.  So the BIA has always assisted us both by BIA members like supercoffee providing bargain priced treats, and also by  lending us equipment and more.  St Mary and St Martha’s have supported the event by organizing the KidZone with games, crafts and face painting. Far too many to list local organizations have participated.  And our elected representatives at all three levels have supported us, purchasing advertising and also assisting us to get guests and permits.  The comment we most appreciate is to have participants tell us that the event ‘looks like Mount Dennis’, that is, there are hundreds of visitors of all ages, from all walks of life, and all smiling together!

A review of the event posters shows the extent of community support.

Each year, MDCA tries to arrange a special guest or feature to make Party memorable, also we distribute pins unique to the year.

2013       TRCA displayed fish and crustaceans from the pond 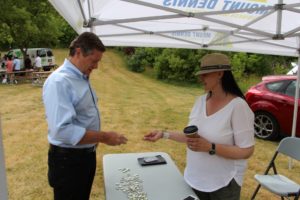 Protests: We have been asked about the morality of sport fishing, and the impact it has on the ecosystem.  Protesters have been at our event, although not in the numbers seen at High Park fishing events.  Careful consideration tells us that with top predators like cougar, bear, and wolves removed from southern Ontario, overpopulation of other species occurs, with dire results.  This means that humane harvesting of wildlife for use as food is a legitimate way to maintain balance, and as part of the educational process, to explain the realities of an omnivorous diet and balanced ecosystem, events like Party by the Pond that show children where fish come from, and how they are harvested, is a necessary part of education.

That said, examination of Topham Pond will reveal the placement of special containers for discarded fishing line and hooks, and conversation with the Fishing Ambassadors, or the MNR or TRCA conservation officers provides further education for everyone on the value of taking kids fishing.

During the winter months, Pearen Park was transformed into an outdoor ice rink built and maintained by volunteers. Members of the public were welcome to bring their own skates and make use of the rink. Over the years many  learned to skate on this rink and used the free skates and hockey sticks available to borrow from the Skate Hut. Warmer winters and COVID have caused a suspension, and regretfully it is unlikely to return. 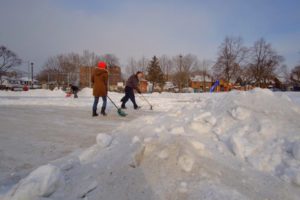 The MDCA hosts an annual general meeting (AGM) where we invite residents to learn about our work and other neighbourhood efforts, and overall celebrate our wonderful community. The AGM is also the once-per-year opportunity to join our board. We usually hosts our AGM late November. Please email us at board@mountdennis.ca or call 416-614-3371 to learn more.

Jane’s Walk are free, locally organized walking tours, in which people get together to explore, talk about and celebrate their community. We usually organize a walk on the Jane’s Walk Festival Weekend, in May.  Our Mount Dennis walks focus on historical sites and the natural beauty of the area. It is a fun stroll in the neighbourhood that can also be very informative, as we invite guest speakers or visit sites not open to the public.   Although MDCA does not host a walk every year, there are that do, typically listed at the Jane’s Walk website. https://janeswalk.org/

The MDCA has (co)hosted many partnered events to increase civic engagement and community building within Mount Dennis. Some past events included election  debates, a Multicultural Forum, town halls on education, safety, and feral cats.

Candidates, Cabinet Ministers, Trustees, and business leaders are frequent guests at our events.  For any collaborations/partnerships, please email us at info@mountdennis.ca !